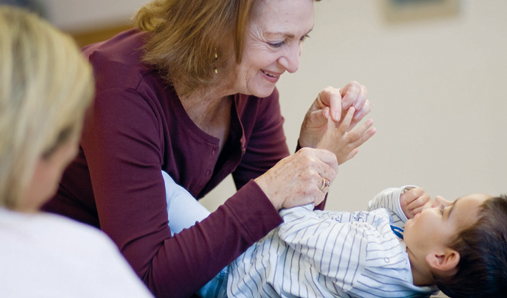 The founder of the method

The founder of Child´Space and a senior trainer in the Feldenkrais method.

Dr Shelhav was born in Israel and had the opportunity to learn from Dr Moshe Feldenkrais himself. She was one of the first thirteen assistants that he trained personally. She assisted him for many years.

Dr Shelhav has been the educational director for Feldenkrais professional training programs for more than 40 years in Israel, USA, Germany and the UK, and a guest trainer in numerous programs internationally. She is the head of the Feldenkraiszentrum in Germany.

After working with many adults and children, she could see that many problems arose already in early childhood. She realized how important it is to detect motor or behaviour problems in infant years. That insight was the beginning of Child´Space. And since 2002 she has conducted trainings in the Child´Space method in Israel, Netherland, USA, Japan, Russia, Austria, and Argentina. She has published a book, Child´Space, an integrated approach to infant development based on the Feldenkrais Method.”

Chava Shelhav received her Master’s at Boston University and her thesis, Working with Brain Damaged Children Using the Feldenkrais Method, was published in 1989. Her doctorate is from the University of Heidelberg where she graduated in the Departments of Sociology and Life Sciences. Her PhD thesis examined the effects of the Feldenkrais Method on learning processes and other aspects of childhood. She has published a number of books in Hebrew, English, and German.